Almost everything in the world today are powered by electricity. However, the majority of our energy production are inefficient and bad for the environment. The emersion of nuclear fission and other renewable power plants are not convincing enough for us to switch out our old yet “easy” ways to produce energy, for example, coal-fired power plants. Many scientists believe that fusion energy is a great alternative, “Fusion holds the promise of providing a practically limitless supply of clean energy to the world.”( Committee on Science, 2014, p. 7). Fusion energy is scientifically recognized to be one of the cleanest and most efficient energy source, and the world should focus on making the transition to developing fusion energy instead of wasting more money on old and inefficient energy sources.

Example: Money Talks. Try increasing the wage of your workers, and they might just work harder than usual.

This idiom is fairly self explanatory. Using money to convince or get a conversation going, or to get the result you want.

Example: The weekend is over, tomorrow is Blue Monday.

To be blue is to be sad, which is why it is used to express the sadness when a weekend comes to an end. I think blue is depicted as sad because of its darker tone, comparing to yellow, yellow has a brighter and uplifting tone.

Example: I have no stomach today to complete any of my assignments.

Example: She and her friend are going to a hen party tonight.

A gathering of women. This idiom is some what self explanatory, as “Hen” represents women, and “Party” represents a gathering.

Example: He’s a lone wolf, he likes working on projects by himself.

Wolfs naturally hunt as packs. It is out of the ordinary for a wolf to be alone. When someone is being a lone wolf, it means that they are choosing/preferring to be alone. 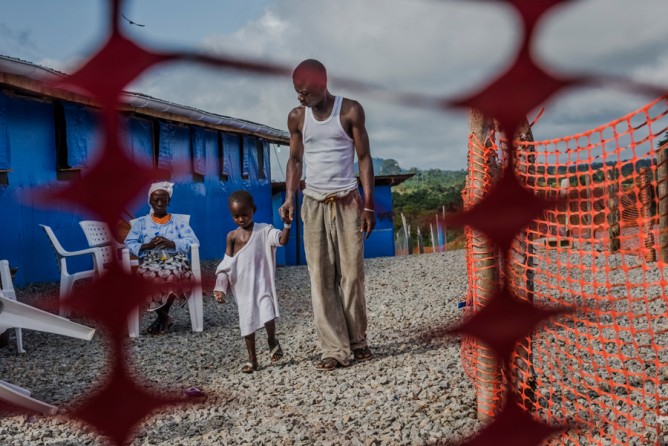 A photo of the Ebola Epidemic in West Africa (Oct. 19 2014) by Daniel Berehulak, a freelance photographer of The New York Times. In the photo, an Ebola survivor named George Beyan was holding his 5-year-old son, William,  who tested positive for Ebola. The staffs at the treatment center told George that he would be the best person to take care of his son, since he was immune to Ebola after surviving it. The son, William, died a few days after this photo was taken.

The purpose of this photo is to demonstrate the bond between the father and the son during the darkest times. Regardless of the situation, human are always looking out for each other. The audience of this photo is everyone in the world who are not experiencing the Ebola Epidemic. Emotional appeal is used in this argument. By showing a close relationship between a father and a son during dark times, audiences who are a father or have a family will feel empathetic toward the figures in the photo. It is also interesting to think about how there are no actual “argument” being made. Instead, we are simply being presented with a carefully captured photo that tells a story about the Ebola epidemic in West Africa.

Today, many believe that Failure is acceptable and essential to success and growth. However, Article 2 suggest that people ignore the fact that failure affect people differently. For example, someone who comes from a low income family, not reaching a certain GPA can lead to the inability to receive a scholarship for college. In this case, failure has a greater impact to a low income student comparing to a student in comparison does not have any financial struggles. The article suggest that teachers should tell students who are low-income or first-generation that they are “good enough”, “they are worthy of succeeding”, “they belong at the school”, “don’t be afraid to ask for help”. Teachers should be inclusive and encouraging when students fail, instead of punishing them for their academic struggles.

In the article, the author talked about his experience in college as a business student. Comparing to his more privileged peers, he was a low-income student and struggles financially. An entrepreneur who gave a talk to him said he received $50,000 to start his own company, but goes bankrupt in his first year. The entrepreneur said from experience that it is “it’s OK to fail”. To the author, this statement was incredibly inconsiderate and not inclusive. As a low-income student himself, he could never have receive that kind of financial fund and risk it like the entrepreneur has. Concluding that it is not always “OK” to fail, especially to students who are struggling financially.

The author transferred from Georgia College to Georgia State University. Before transferring to Georgia State University, she claimed that she had high a GPA when she was in Georgia College. When She transferred to Georgia State University, she comfortable with her writing skills and changed her major to English. She later found out that she was struggling in her new British American Literature class, and felt “more than unprepared”. She had to consult her professor to address her concerns on writing. She later earned a grade of B on her first paper, the lowest grade she has every received in college. To her, her struggle helped her improved her writing and showed her what she was lacking. From this literacy narrative, I learned that struggling is a way of learning and that if you only stay within your comfort zone, you are not learning to your best ability.

After reading some of my peers’ responses, I found a few differences among the peers when analyzing the different aspects of ethos.

Traveling around on my own for the first time. Creating a journal with my friend. How I made my first friend on the first day of high school. Struggles when trying to compose a poem. Learning how to sail for the first time. Reading Star Wars’ expanded stories. Writing my first literary analysis essay in an APA writing format. Learning academic material by watching YouTube. Roblox internship experience. Managing a long distance relationship. Working on design challenges to help individuals/communities solve their problems in a creative way. The inability to compose academic writing.

Growing up, essay writing has been the hardest thing to do. I never know what to write, and what story to tell. I never know what part of my life is story telling worthy. Growing up, I have faced many challenges when writing academic papers. I have always felt an invisible force that holds me back from telling my story. My teachers never succeeded in helping me to find my own voice. Throughout my academic career, I have always felt that I am writing in someone else’s voice. That may be the reason why it takes me a long time to compose a piece of writing. Instead of writing what I meant to express, I have been thinking about how someone else would.