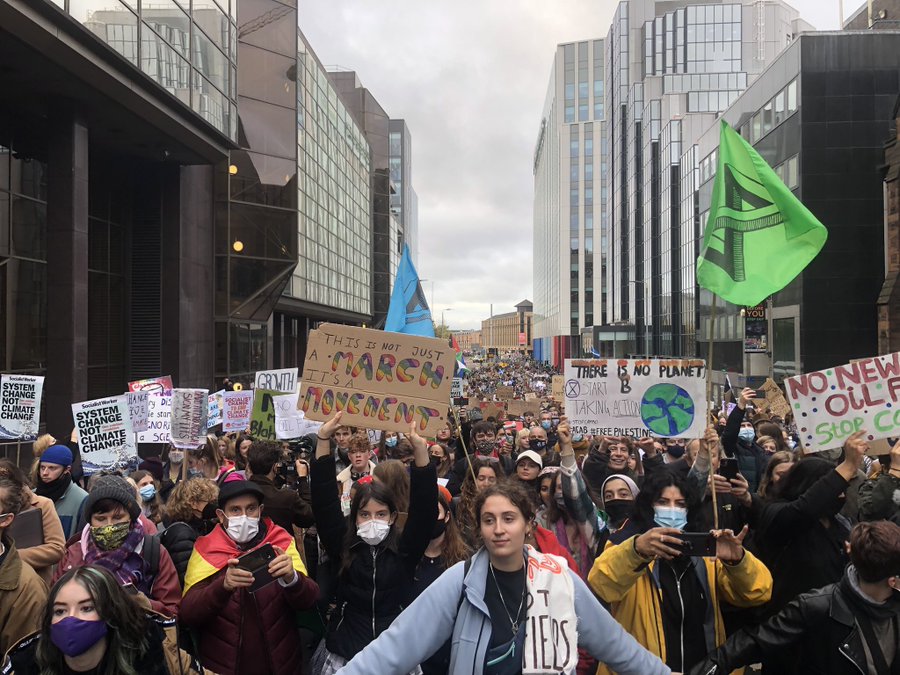 At the opening of COP26, the UN summit on climate in Glasgow, Scotland, UN General Secretary António Guterres addressed the world leaders who had gathered:

“The six years since the Paris Climate Agreement have been the six hottest years on record. Our addiction to fossil fuels is pushing humanity to the brink. We face a stark choice: Either we stop it, or it stops us. And it’s time to say, “Enough.” Enough of brutalizing biodiversity. Enough of killing ourselves with carbon. Enough of treating nature like a toilet. Enough of burning and drilling and mining our way deeper. We are digging our own graves.”

On Friday November 5, the youth climate activist movement Fridays for Future led a march in the streets of Glasgow, to protest the failure of governments and leaders to make sufficient progress to address the reality of catastrophic climate change.

Yesterday (Saturday, November 6) activists of all ages returned to the streets in an even larger march, organizers from the COP26 coalition, led by indigenous leaders and groups from the Americas, Asia and Africa, with organizers reporting more than 100,000 protestors from all over the world.  Fighting heavy rain and high winds, they marched to demand far more rapid, radical action to decarbonize the global economy, and to ensure that the world’s massive assets of oil and gas reserves are not extracted from the earth.

At the concluding rally, youth and indigenous climate leaders from communities throughout the world spoke to the crowd.

I watched the speakers in real time, a gift to the world via live streaming technology.

I was especially moved by 24-year-old Ugandan activist Vanessa Nakate.  She spoke about a conversation she had just had with the head teacher of a school in Uganda that had been devastated by a terrible storm, blowing the roof off the building, leaving the children without shelter. 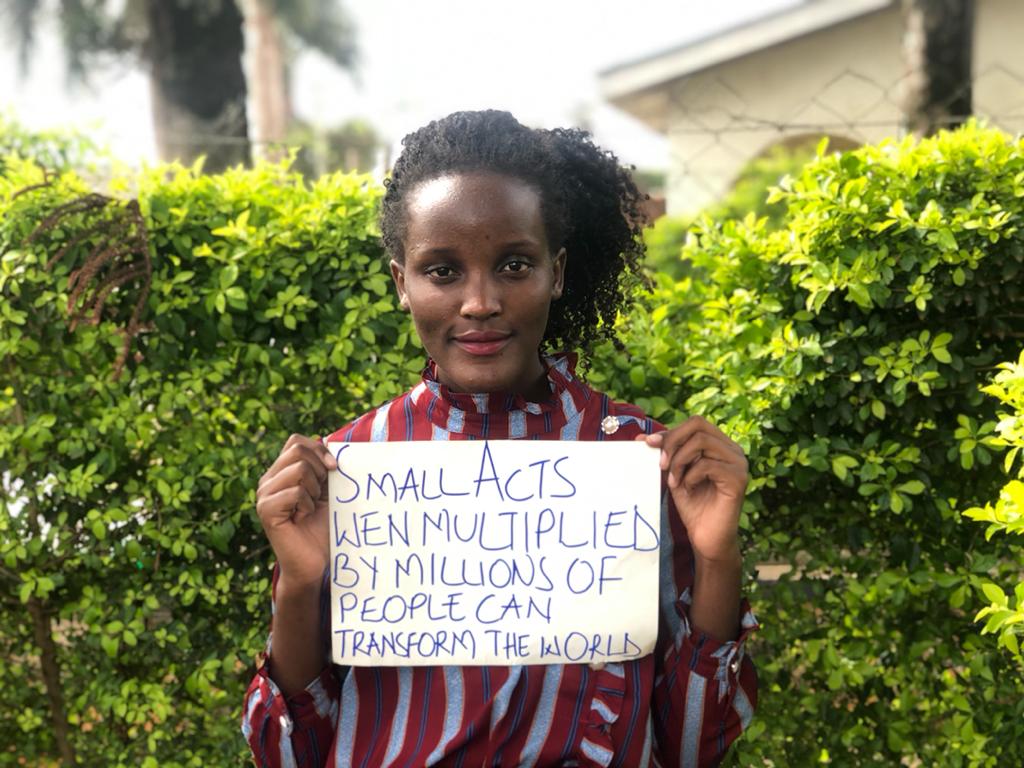 Photo of Vanessa Nakate from WeAreRestless.org

“Many schools are being destroyed because of extreme weather events. I need someone to tell me how to explain to farmers who are losing their crops and farms because of droughts and floods that seem to never end.

And leaders continue to open up new coal power plants, construct oil pipelines, and frack gas without paying attention and listening to the voices crying out for help because of the destruction that is happening.  Leaders fail to understand that we cannot eat coal, we cannot drink oil and we cannot breathe so-called “natural gas”.

Is there anyone among you who can help me explain to girls dropping out of school, girls being forced into early marriages, women walking long distances to collect water and find food for their families.

That the decisions being made by governments right now are only going to increase the challenges that they are facing. The climate and ecological crisis is not just about weather patterns or data points. It is about people, real people, like the head teacher of that school, real people like the children, real people like you and me. And it is not taking place at some distant time and place. It is happening right now.

Yes, we have to keep global temperatures to 1.5 degrees. But it still won’t be safe for communities like mine.

The science is very clear: the most recent IPCC [report] says that in order to avoid the worst impacts of the climate crisis, we have to end the development of all new fossil fuels. Existing developed reserves exceed the 2 degree budget, and oil and gas reserves alone break the 1.5 degree budget. Even the International Energy Association stated in its recent world energy outlook report that we cannot have any new fossil fuel development if we are to have a fighting chance of staying below 1.5 degrees. 9 million people are dying prematurely every year from breathing toxic air from the burning of fossil fuels.

More than 90% of the world’s children breathe unsafe air every day.

So first, we need to keep coal, oil and so-called “natural gas” in the ground.

I am from Kampala Uganda, a country that has one of the fastest changing climates in the world. And as I’ve grown up I’ve studied more and more about how the climate crisis was already ravaging vast parts of the African continent, which is tragic and ironic when you think about how Africa is the lowest emitter of CO2 emissions of all continents, except for Antarctica.

Many Africans are losing their lives, while countless more have lost their livelihoods. The droughts and floods have left nothing for the people, nothing except for pain, agony, suffering, starvation, and death. And a recent World Bank report says that we can see up to 86 million people displaced in Sub-Saharan Africa alone due to rising sea levels, desertification, declining fresh water, and food scarcity.

Over the past few months there have been deadly heat waves and wildfires in Algeria and devastating flooding in countries like Uganda and Nigeria, and the UN had declared that Madagascar is on the brink of the world’s first climate change famine.

Tens of thousands of people are already suffering catastrophic levels of hunger and food insecurity after four years without rain.

The climate and ecological crises are already here.

But so are citizens from around the globe.

Leaders rarely have the courage to lead. It takes citizens, people like you and me, to rise up and demand action. And when we do that, in great enough numbers, our leaders were move.

We are all strong together, and united, and we can make this happen.

Another world is possible.

What we have always wanted is possible.

We can do this together. We cannot get discouraged after everything we have done. We remain hopeful because another world is formable.

Strength and hope is our way forward. And courage.

Even deniers will start to see what we see. Their eyes will be open and enlightened by our persistence and truth. And they won’t deny any more. They will join us in this fight, and demand for this world that we envision.

The leaders will listen because they won’t have any other option, because the power of the people always wins.

Yes, we are unstoppable. And we are going to heal this land. In fact, we are already healing the land, with love, grace and people power.

So we should sing, pray, dance, love, protest, organize, mobilize, shout, because another world is possible.

And to leaders, governments and businesses: they must always remember that we are all connected to earth. Earth is spiritual. Earth has a life of its own. Earth has an intellect. Earth has an understanding. Earth speaks and it can be spoken to. These are words I learned from my spiritual father, Apostle Grace.

The COP26 Coalition is convening a “People’s Summit for Climate Justice” today through November 10.

You can register here:

Here is the program:  https://cop26coalition.org/peoples-summit/