March for Our Lives, public domain photograph from Wikimedia Commons

“With a heart shattered over the massacre at the elementary school in Texas, I pray for the children and adults who were killed and for their families.  It is time to say, ‘Enough!’ to the indiscriminate trafficking of guns.  “Let’s all work to ensure that such tragedies never happen again.”

“Don’t tell me that guns aren’t the problem, people are. I’m sick of hearing it.  The darkness first takes our children who then kill our children, using the guns that are easier to obtain than aspirin. We sacralize death’s instruments and then are surprised that death uses them.”

“For God’s sake stop saying the gunman acted alone. He acted with every Republican Senator and at least one Democrat, who feverishly block all attempts at gun violence prevention.  He acted with @GregAbbott_TX, who goaded Texans into buying more guns, and then lowered the age for purchase of handguns to 18 & allowed permit-less open carry with no training necessary.  He acted with the former President, who used/uses his platform every day to fuel hatred and advance the sale of weapons of war. He acted with a right wing media that spews lies and conspiracies and seems hellbent on sparking a civil war.  He acted with clergy, elected officials & community leaders who equivocated & groveled & diverted attention after Columbine in 1999 & after every shooting since then, so as not to jeopardize their jobs.The gunman acted with them, and with so many more. Don’t dare say he acted alone.”

“When will these insane acts of violence end?  It is too great a burden to bear. The word tragedy doesn’t begin to describe what occurred. These massacres cannot be considered ‘the new normal’… We have made guns an idol in this country… You cannot reconcile guns with life…  I believe with my whole heart that gun control has to take place in a more radical way.”

Marching for our lives

In the wake of the recent massacre of 19 schoolchildren and two teachers at the Robb Elementary School in Uvalde, Texas, and the racist mass murder of 10 Black people in a Buffalo supermarket — among 256 mass shootings in America in the first five months of 2022 — millions of concerned Americans  join Pope Francis in saying “Enough!”   Yesterday, thousands of people joined together across America in nonviolent marches and rallies to protest gun violence in our country, calling for radical action to regulate access to guns to protect our children and our family members, and to ban semi-automatic guns and other military style weapons, now.

Yesterday protestors gathered in Washington, D.C. heard from speakers who have been on the front lines of the struggle to stop gun violence.  They heard from David Hogg and X Gonzalez, who co-founded March for Our Lives after surviving the 2008 mass shooting at Marjory Stoneman Douglas High School in Parkland, Florida.

“All Americans have a right to not be shot, a right to safety.  Nowhere in the constitution is unrestricted access to weapons of war a guaranteed right.  We’ve seen the damage AR-15s do. When we look at the innocent children of Uvalde, tiny coffins horrify us. Tiny coffins filled with small, mutilated and decapitated bodies. That should fill us with rage and demands for change.  “If our government can’t do anything to stop 19 kids from being killed and slaughtered in their own school and decapitated, it’s time to change who is in government.”

As he spoke, David Hogg stood next to the parents of Joaquin Oliver, a 17-year-old killed in the Parkland shooting, wore shirts bearing a picture of their son.

“My grandfather was taken from the world by gun violence. Six years after his death, his mother, my great-grandmother, was killed in church during Sunday service. We have all been touched by tragedy, we have all been lifted up by hope. Today we’re telling Congress, we’re telling the gun lobby and we’re telling the world this time is different. This time is different because we’ve had enough. We’ve had enough of having more guns than people here in America. Together, we can carve that stone of love and hope out of that mountain of death and despair. Together we can build a gun-free world for all people.”

Dozens of other rallies saw protesters call for stronger legislation. In Buffalo,The group held a moment of silence and chanted “Not one more”.

March for Our Lives has called for an assault weapons ban, universal background checks for gun purchases and a national licensing system.

The US House has passed bills that would raise the age limit to buy semi-automatic weapons and establish a federal “red flag” law. But previous such initiatives have stalled or been watered down in the Senate. The new marches were to take place a day after senators left Washington without reaching agreement in guns talks.

Yesterday in New York City hundreds of protestors marched across the Brooklyn Bridge from Cadman Plaza to Wall Street.

Thousands marched in cities and towns all over the country, and millions of us were with them in spirit.

We gathered in Parkland, Florida.

We gathered in Buffalo, New York, outside the Tops Friendly Market.

We gathered in Atlanta, Georgia, outside the Ebenezer Baptist Church, where Rev. Martin Luther King was pastor.

We marched in San Antonio Texas, where 26 people were murdered in a nearby church in 2017.

We marched through downtown Los Angeles to City Hall.

We marched in Albany New York to the state legislature.

We marched and gathered in many other cities.

They wore T-shorts and signs, including:  “Moms Demand Action,” Should I Be Learning Without Fear?”  “Protect Kids, Not Guns,” “End Legal Immunity for the Arms Industry,” and “Enough.”

We marched and gathered to speak truth to power. 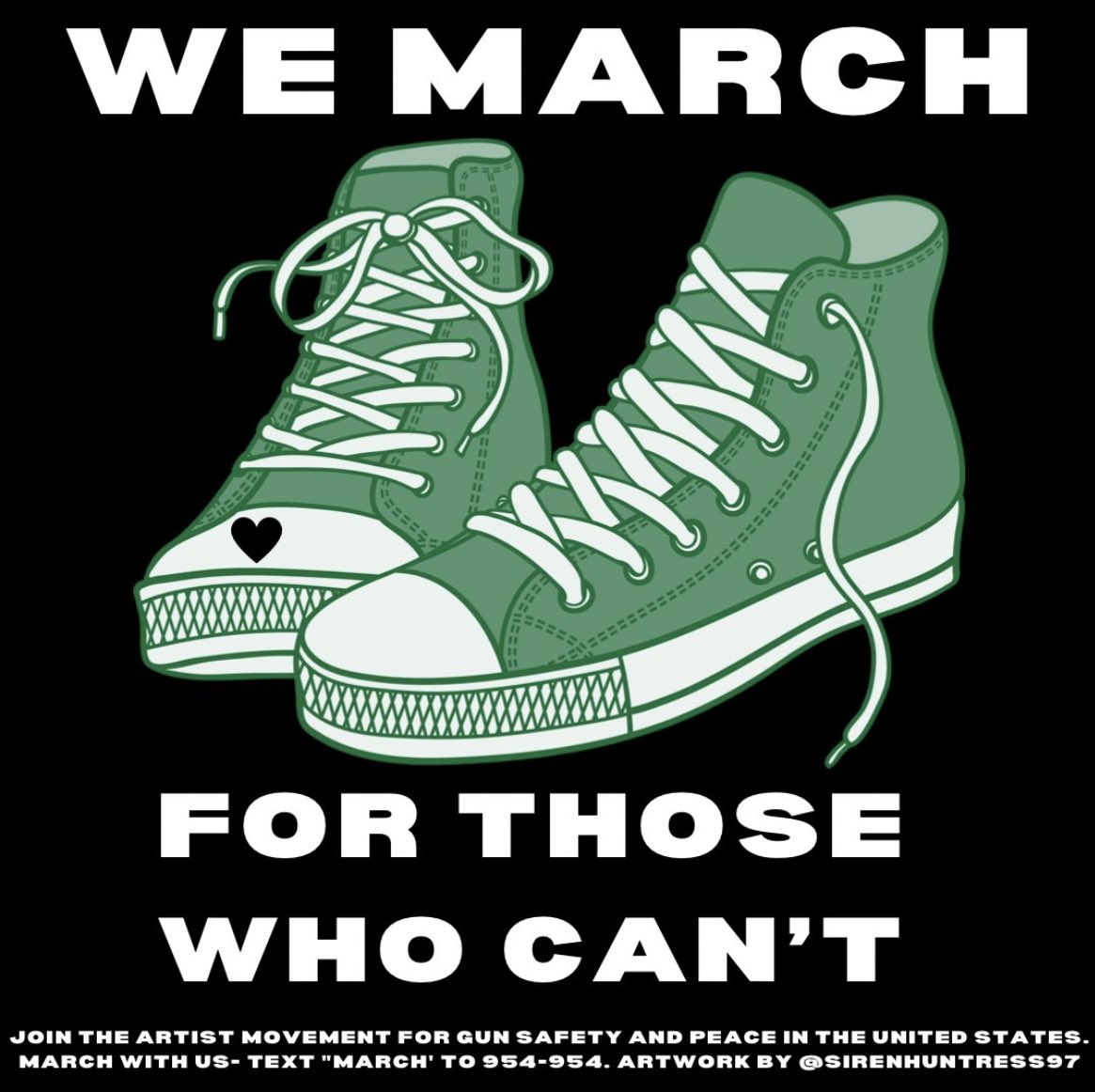 Will this moment be a turning point?  Will our government take the required action?

Last week, the House of Representatives passed a major gun-control bill on a nearly party-line vote (223-204).  If passed as legislation, the bill would raise the age for purchasing semiautomatic weapons, prohibit the sale of ammunition magazines that hold more than 15 rounds, among other restrictions.

There is zero chance that the House bill will pass in the Senate.

This morning, however, a bipartisan group of 20 Senators (10 Democrats, 10 Republicans) announced an agreement in principle on a series of gun control measures.  If passed into law, the Senate deal would be far less robust than the House bill.  And yet — it would still be the most significant federal gun control legislation since the Brady Bill passed Congress in 1993, with a number of important safety measures that have previously been blocked by NRA-supported legislators, including enhanced background checks for prospective gun buyers under the age of 21, and block gun sales to domestic abusers even when the abuse victim was not a married spouse.   In other words, this agreement represents an important step forward.

According to Everytown for Gun Safety President John Feinblatt, if enacted into law, the framework would be “the most significant piece of gun safety legislation to make it through Congress in 26 long and deadly years.”  Brady/United Against Gun Violence President Kris Brown called it “a 30-year breakthrough in the making” and “a historic, new beginning that breaks the stranglehold of the gun industry.”

We must remain strong.

We must speak as a united, nonviolent movement to demand an end to gun violence.

We must hold our government accountable.

In this spirit, we must continue to join March for our Lives and all concerned citizens to pressure Congress to ensure that the bipartisan agreed framework translates into legislation with all of its elements intact.

We stand with Pope Francis and all people of conscience in saying in ‘Enough!’ to the indiscriminate trafficking of guns.